Why do some people play annoying, loud music out of their cars?

The Open Wound sent a reporter to find out.

“Excuse me young man, I wanted to ask you why you play loud, bass music from your car as you drive through the town centre?”

“Yeah.  The peoples on the street.  They findz us musik cool!”

“And can you tell me how you know that?”

“Everybody tellz me so.  I knows all the folkz around this ghetto.  I iz a local boy.  What uvva questions you got?  In it.”

“I have three more questions;
Why are you speaking Jamaican when you were born in Middlesex?

Why are you wearing pyjamas and a baseball cap whilst driving your car?

And why, oh why would you think that anybody other than a brain dead moron would want to hear that awful bloody noise that you blast out of your Batmobile?”

“Oooh…you iz soooo old, man!  You are uncool!  And furthermore, you iz going to get cut by my ringz when I gets out uv this vehicle and wails on your face!”

“So, why aren’t you getting out of your vehicle?”

“I appear to have got my speaker cables tangled up with the tie cord of my pyjamas, I mean, cutting edge street wear.  I think I’m losing the circulation to my groin.  Can you help me out, man?”

“Sorry, I can’t hear you.  I’ve got to go now before my ears start bleeding.”

Many parents would like school reports on their children’s performance texted or e-mailed, a survey says.  68% of parents said they wanted schools to use such technologies to keep them up to date more frequently.  32% said they cba and stfu.

Here is my son’s latest report :

I don’t know what they’re teaching those kids at that bloody school; everybody knows it should be ‘a 10 dunce’!

Earlier today boffins attempted to attain everlasting fame and Nobel Prizes by starting up the Large Hagridden Colander.  The Colander is approximately 27 kilometres across, which means you can strain a lot of peas but it’s a struggle to fit it in your kitchen cupboard.  Its primary purpose however, is to find Higgs Bison.

In fact, all they had to do was ask me, or anybody who’s been to Whipsnade Zoo.  Higgs Bison are not hard to find, walk past the Penguins and follow the foul smell until you get to the restaurant.  You can see a whole herd of them from there.

Meanwhile, back inside the Colander there’s a terrific explosion and a flash of blinding light.  The doors to the laboratory crash open and the boffins stagger out into the daylight.

“What happened?  What did you see?” the newspapermen clamour.

“I saw only bright light but I heard the voice of The King,” whispers the first scientist.

“No, I heard Elvis singing ‘Love Me Tender’,” replies the scientist.

His colleague wipes tears from his cheeks; “It was wonderful, I heard Bach, ‘The Third Brandenburg Concerto’,” he cries.

“The first thirty seconds of ‘Pretty Vacant’ by the Sex Pistols,” says a third.

And so it goes on.  All who were present for the experiment have heard a different piece of music, the piece that ties them to the unheard music of the unseen substance of the Universe.

We asked Professor Stephen Hawkins what it all means.

Rock ‘n’ roll memorabilia has proved to be a booming business in recent years, according to the BBC’s business correspondent Martin Shankleman.

For example; the scratched and charred Fender Stratocaster guitar, set alight by Jimi Hendrix in March 1967 is to go under the hammer at auction.

‘Go under the hammer’?  Jeez hasn’t that instrument suffered enough?

Surely, it’s time the poor thing was cremated properly and sent to join Jimi (wherever he ended up).  They could make themselves useful and burn everything ever played or written by Chris de Burgh while they’re at it.

In a similar move, I am auctioning the 500ml can of McEwan’s Ale that was hurled into the audience at a Boomtown Rats concert in Hemel Hempstead in 1978.  Still visible in the side of the can is the dent caused by my forehead.

Originally costing around £1 the price expected at auction could be as high as £1.75.

“It appears to be an old tin of beer.  Do you want me to open it for you, you poor, smelly, alcoholic, old man?” she asked, sympathetically.

The ‘Slug and Philosopher’ was pretty peaceful last evening. Ted was reading the pub’s copy of ‘The Sun’ and Wayne was tossing darts at the bull’s-eye of the battered practise board.
“What’s this new band ‘DZero’ like then?” Ted asked.
“I’ve never heard of them,” I confessed. “What’s the story?”

“No Ted,” said Wayne leaving his darts in the board and joining us with his pint, “No, Dzero is a set of Physics experiments in America designed to examine matter.”
He waved a dart at Ted’s paper.  “If you’re going to be one of the morons that read this horrible rag, at least try and get the facts right!”

“What sort of experiments?” Ted asked from behind his pint of Mackeson’s.
“Lots of experiments,” said Wayne, “Like trying to solve the hierarchy problem.”

Ted and I sipped on our beer and made faces as if we knew what Wayne was on about.  Something we’ve been doing for many years now. But he didn’t care, he was getting into his flow.

“Gravity is one of the weakest physical forces in the universe and over ten years ago Randall n’ Sundrum proposed that a so far undetected spatial dimension was weakening the force of gravity, but so far scientists haven’t told us what that is.”

“Go on Wayne, tell us what it is,” I encouraged him.
He looked at me suspiciously to see if I was taking the piss.
“It’s obvious to me that the undetected dimension is actually the huge weight of dark matter that represents our unrealised events, both past and present. It appears as negative gravity but scientists will have to study the object in our solar system which has the largest gravity to get their proof.”

He took a long pull on his lager, wiped the froth from his top lip and thumped his glass down on the table in a rather triumphant manner.
“We’re gonna have to look in the sun for the answer.”

“Well you’re not looking in my copy,” said Ted, clutching his paper to his chest, “Only us moron’s are going to know the answer!” 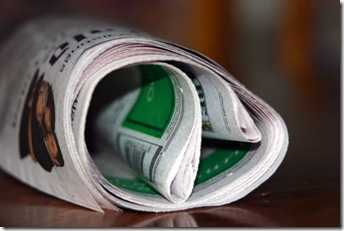 Posted in The Slug and Philosopher | Leave a comment

During the “Phone in with Your Own Recipes”, section of the programme fellow chef Anthony Worrall Thompson bent to retrieve some fallen cutlery.

At the same moment Ainsley, who was standing behind him, brandished a large Egg Plant at the camera and asked the television viewers “Can anybody tell me what to do with this?”

“The flood of telephone calls and emails telling Big Ains what he could do with that Aubergine wiped out our systems,” said distraught producer Ben Dankisset.

“Unfortunately Ainsley made things worse with his catchphrase ‘What am I like?’ which prompted another influx of suggestions.”

Winner of the competition was Mrs N Lawson from London who suggested something, that although physically impossible, moved the judges to tears by its simplicity and significance.